Ten years into marital bliss is definitely qualification enough to be able to churn out "something nice" (minus the occasional disasters which I guess even the accepted great chefs too have).

Initial days of marriage I must admit have been very trying on the culinary front. With me having almost no knowledge of the culinary kingdom I was left to trying recipes with whatever little knowledge I gathered from some of the cookery classes on television and a passing glimpse of Mom at work in the kitchen. Hubby dear was really very patient as there were days when I could not eat what I cooked, he would smilingly have it with a sly remark of "your own creations so please do eat:)". I had to impress him and being the one to accept nothing but the best, I surely had to come out with flying colors.

Next time home, I decided to watch closely as to what happens in the kitchen (during school and college days, studies were priority and then television, friends and generally doing nothing took centre stage, so visits to the kitchen to try a recipe were few and far).

Writing down mom's cooking recipes that were made regularly at home and with tips from mom-in-law on his favourite dishes from her repertoire, I made a foray into the world of colourful and powerful ingredients which could simply be a delight or disaster just by the way one incorporated them in the dishes. They all seemed alien at the outset (distinguishing one dal/spice from the other was a challenge) however, patience and a lot of work in my space - the kitchen - got me to befriend each one of them, so much so that they now begin to talk the moment I enter:)

Our Bundle of Joy - the Fussy Eater

With the arrival of our little bundle of joy however, things took a turn. She was the little fussy eater (as most kids are) and most of my time then was spent trying to find ways of getting her to eat all the veggies(the paediatrician would always so easily suggest including more green leafy vegetables in the diet - easier said than done with a tiny tot who had a mind of her own) and me the new Mom was at her best trying to get baby dearest to eat well.

All the long hours trying to whip up something that would appeal to her tiny tastebuds have proved extremely rewarding. She now loves trying out new dishes, ingredients and loves sharing my experiences. In fact, she is my first food taster now.

With me having proved my skills in the culinary art to quite an extent, hubby and daughter now want to have "something nice" every day. The two of them have got me cooking quite a bit and yes, probably it is their criticism, comments and appreciation that has helped me polish my skills and make an effort to get better each day. 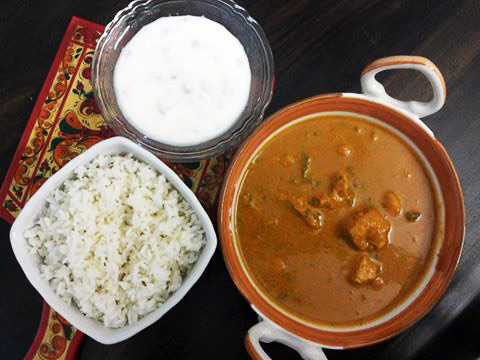 I have been inspired by the innumerable food blogs that have such attractive and delicious recipes being written about each day. One fine day from reading these, I decided to be a part of the food blogging world and start one of my own. It is such a pleasure blog hopping and checking out the wonderful recipes created my marvellous home chefs.

Cookingupsomethingnice, my food blog is all about sharing the creations in my kitchen, my world. From a mere survival requirement, cooking has come to be an integral part of my life adding a whole new dimension and has become a passion. In the past few years I have tried my best to add a new angle and meaning to my time in the kitchen.

A small beginning, it has given me the opportunity to combine my writing with culinary skills and I have been enjoying the writing assignments that help me get closer to food and delve deeper into a world that does not cease to surprise.

Email ThisBlogThis!Share to TwitterShare to FacebookShare to Pinterest
Labels: About Me

Leave Me A Note At

Cooking Up Something Nice

Promote Your Page Too